Join Thomas and Becky Repp as they team up with Gary Mantz to bring you a new road trip adventure each week. American Road Trip Talk is your chance to discover the backroads that embody true Americana. As the owners and producers of award-winning American Road magazine, Thomas and Becky want your future road trip to be both interesting and exciting. By teaming up with veteran radio broadcaster, Gary Mantz, they offer up valuable road trip planning information. 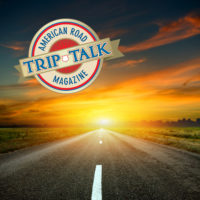 Do’s and Dont’s of Planning Your Next Road Trip

We all want our road trips to go just right. Much of the success (and joy) comes from smart preparation done when there is still adequate time. Vinnie Richichi of DRIVETIME With New York Vinnie shares his Do’s and a few of the Don’ts derived from his numerous highway adventures.

The Art of Suffrage and Midwestern Murals

Kennedy Space Center Visitor Complex is organized into Mission Zones where attractions and tours are grouped by chronological era. From the dawn of space exploration to current and ongoing missions, you can get an up-close, hands-on feel for the story of humans in space. Rebecca Shireman, Manager of Communications and Public Relations at the Complex, is our guest.

This Way to Canada: Border Towns of Western WA

The cities of Blaine, Lynden and Sumas in Washington state are gateways to Canada, fortified by mutual friendship along an undefended border that separates the USA from our neighbors to the north. Each has its own appeal and all welcome travelers with a warmth that belies the cool PNW. Matt Shea surveys the scenery for us.

Mark Greene of Cars Yeah fame is back to survey an elegant array of automobile museums located in New England and also share a story about one of the world’s most famous car aficionados who once took a drive in Rhode Island and ended up buying a dream house.

The Queen Mary And Fortuna Redux In Long Beach

The Long Beach City Council recently approved $2.5 million for the Queen Mary to facilitate plans for urgent repair work as the city contemplates the venerable vessel’s future. It is not the first time the “Ship of Woods” (or “the Grey Ghost” during WWII) has faced daunting challenges to its survival. Nicole Strickland joins us to share the saga. Thanks to Kelly Puente of the Long Beach Post.

The RV Craze Rolls On

As pandemic restrictions ease their grip on the traveling public, there is an RV craze underway. The Who, What, When, Where and Why of vacationing with your home on wheels is the topic for this episode. Guest Brian Demo is a retired U.S. Marine helicopter mechanic who has transitioned to a mobile Master RV technician. When COVID hit, he joined JustAnswer as an online way to answer hundreds of questions a week from RV owners and renters around the world.

The Mob Museum Of Las Vegas

The Mob Museum, officially the National Museum of Organized Crime and Law Enforcement, is a history museum located in downtown Las Vegas, Nevada. Opened on February 14, 2012, the Mob Museum features the artifacts, stories, and history of organized crime in the United States, as well as the dedicated efforts by law enforcement to prevent such crimes. Geoff Schumacher, vice president of exhibits and programs, is our guest.

World War I Memorial and Museum in KC, MO

World War I still is referred to as the Great War or more ironically, “the war to end all wars.” Influences of that great military conflict resonate today. An historical presentation, with unrivaled exhibits and an unsurpassed collection of artifacts, are deployed in Kansas City, Missouri at The WWI Memorial and Museum. It is monumental in every sense. CEO Matt Naylor and Curator of Education Lora Vogt share their perspectives.

Over 80 years after Dorothy discovered, “There’s no place like home,” the world returns to Oz every so often nonetheless and thus to a magical place that remains close in heart and mind. Classic Hollywood historian Geoffrey Mark has a wealth of knowledge to share about The Wizard of Oz and its boundless legacy which revives itself with each new generation.